On 1st June 2022, the LIFE GreenShoes4All project organised an online conference in the framework of the EU Green Week. The event was a valuable opportunity to share with more than 100 participants, many of them companies, the latest results of the project, including the achievements in terms of economic savings of the companies participating in the project, as well as the project alignment with the ongoing EU green transition.

Carmen Arias from the European Footwear Confederation (CEC) began the webinar by introducing the audience to the current EU legislative framework in terms of circularity, recyclability and sustainability. Her excursus started with the launch of the EU Green Deal in December 2019. Then, she passed to the package of proposals under the Circular Economy Action Plan adopted by the European Commission in March 2022 that includes relevant elements impacting the footwear sector such as the Sustainable Product Initiative regulating the future Digital Product Passport, the EU Textile Strategy and the Directive “Empowering Consumers for the Green Transition” tackling greenwashing. Finally, she introduced some EC adoptions foreseen in the coming months, for example the review of the REACH regulation and the proposals targeting plastics.

The first part of the webinar focused on ecodesign. Maria José Ferreira from the Footwear Technology Centre of Portugal (CTCP), the project leader, introduced the topic by explaining the main findings on the project to reduce carbon footprint of the final footwear product: reducing the footprint of each previous step, working on design and selection of the best materials, avoiding waste as much as possible. This is the base of the Product Environmental Footprint (PEF) methodology and Ecodesign Guidelines for the footwear industry available on the project’s website. Borja Mateu Romero from the Spanish Footwear Technology Centre (INESCOP) showed some examples of Spanish footwear manufacturers engaged in recyclability, reparability, durability, zero waste, zero emission: a demonstration of how to produce by maximising resources. Vera Vaz Pinto from the CTCP went more into detail by illustrating facts and figures of the PEFCR methodology applied during the project. Such methodology has been implemented by the Portuguese company AMF, accounting more than 20 years of experience in safety and occupational footwear. Tiago Machado explained how three of their models have been “re-ecodesigned” by using natural and recycled materials, reducing the weight but respecting the safety standards and tests and maintaining reasonable prices. 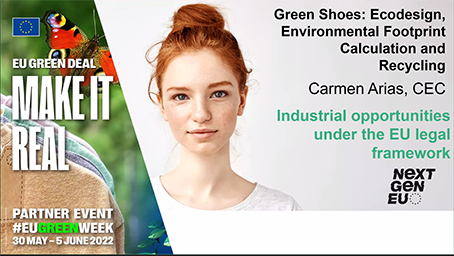 The second part was dedicated to recyclability. The three speakers of this section illustrated how different materials could be integrated in the production of footwear and its components. From EVATHINK (Spain), a company that is awarded the Governmental Spanish certification of Carbon Footprint of Organisation, José García detailed the production process of new recycled materials by mixing polymers. Carlo Coelho representing Atlanta, a company operating in the Portuguese footwear cluster since 1995, followed by explaining how they recycle thermoplastics and rubber for footwear soles. Finally, Mihai Georgescu from the Leather and Footwear Research institute (ICPI) in Romania presented some recycling solutions proposed to footwear manufacturers based on adding different types of waste (e.g. post-consume leather, vulcanised rubber and wood) to materials.

At the end of the event, the active Q&A session with the audience gave the opportunity not only to further develop the contents of the webinar, but also to touch other relevant topics such as the need of international certifications of carbon footprint, the recyclability qualities of leather and the regional and national funding opportunities for enterprises working towards their green transition.

The climate changes and the environmental degradation are a global threat for all. Following the disruption of the value chains and the increase of energy prices caused by the Covid-19 pandemic and the geopolitical crisis, the transition to a green economy is no longer an option. The challenges of footwear recycling are many due to the complexity of shoe processes and materials; however, the LIFE GreenShoes4all project has demonstrated that a new course is possible and accessible, and that the sector is ready to engage and contribute to the green transition.

The LIFE GreenShoes4all consortium wants to thank again the EU Green Week for hosting and supporting the event.